A crystalline Friday evening unfolded on the patio of the TEST working headquarters (aka Krista’s house). The sun solidified its hold on the evening sky after a bumpy day of clouds. Hannah Price, the director of TEST, had just arrived from London on some of these golden rays of sun, and Krista Jaquet and Jamie Sievert, co-authors of TEST, toasted her arrival and the start of the TEST creative team workshop weekend.
The toast was brief. Hannah immediately delved into the notes she had made on the TEST libretto. Her comments were direct and to the point. You could almost hear her brain whirring. She rattled off a list of questions for Krista and Jamie, as the trio delved deeper into the text. In addition, Hannah began to present her ideas for staging TEST and her vision of where she wants to take TEST.

SOARING IN ON MUSICAL NOTES

The next day, on Saturday, the musical team arrived at TEST HQ on a stream of melodies: Jakob Vinje, the composer of TEST; and Clemens Bötel and Christine Archer, the musical directors. Over a breakfast that turned into a brunch and extended well past lunch time, the music side of the creative team gave an in-depth description of the musical motives of each song.
A large spread sheet, set amid the coffee cups and bread and jam, fell off one edge of the dining table. Jakob referred to the coding for each TEST song that Krista had entered on the spread sheet: rock anthem, operatic, rock ballad, pop, massive rock number, and so on. And as Jakob went over each number, he gave a hint of how he as a composer works: “I play with all the colors I have at my disposal,” he said.

The shading of emotions through the music is a big part of any opera or musical. The music picks up where words end. The actors extend the mood on stage with their character depictions. Director Hannah Price made it clear at the workshop that she will work hard with the actors so that they understand the moves, moods and back stories of the characters.
“The first couple of rehearsal days we will be going deeply into each character, reading the text line-by-line and word-by-word,” Hannah said as she explained her working method.
Dani Raaflaub, who plays the character Tony in TEST, agreed with Hannah’s working method. “Musical actors tend to focus more on the music than the text,” Dani said, adding that the TEST actors will be pleased that Hannah plans to devote a lot of time to the acting side of the production.

SINGING INTO THE NIGHT

The creative workshop continued into dinner, and then shifted from the dining table to the piano. Jakob presented various themes for the finale that he had written, with the discussion then turning to the staging of the themes and how much text was needed to tell the story and how much text needed to be left out.
Like at an old-fashioned revival, the entire creative team gathered around Jakob at the piano as Dani, now joined by Anne Maria Schmid, who plays Sophie in TEST, sang some TEST songs, including several new compositions that Jakob had recently composed. It was an evening of firsts – the first time the team heard some new compositions by Jakob and the first creative team workshop with Hannah. It was also an evening of solidifying and amplifying the themes and ideas that have emerged as the bedrock of TEST.
The night did not end early. But with the singing and the music, it ended literally on a happy note. 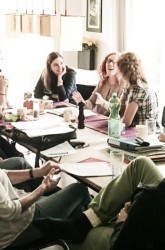 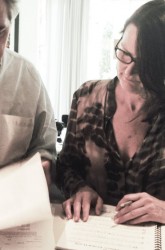 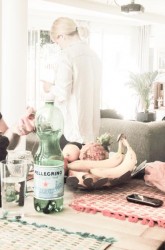 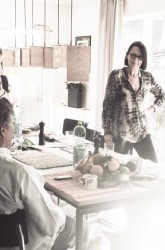 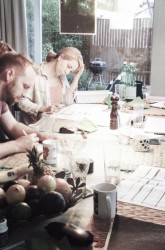 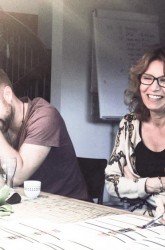 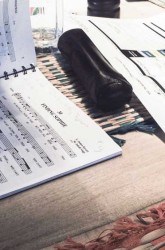 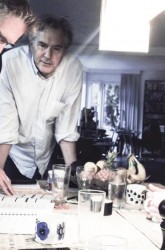 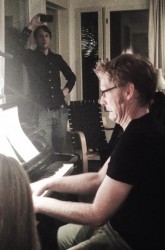 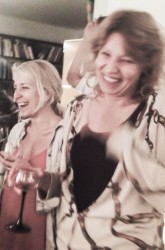